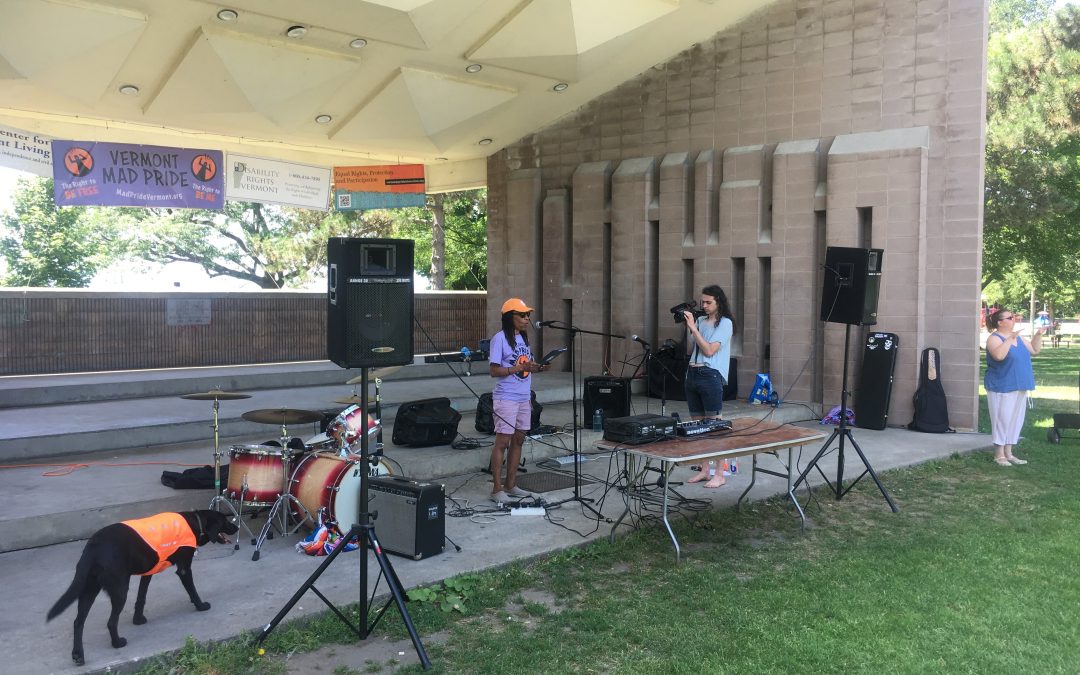 The bandshell at Burlington’s Battery Park hosted speakers from across the state on Mad Pride Day. Excerpts follow.

My chief qualification for being here is my own history of being seen as mad enough to lock up at a significant time in my life.

When what had happened was I had experienced a whole lot of losses. The cascading subsequent losses in my life of a job, secure housing, and relationships; the need to use the food shelf and charity services; and being on disability for many years launched me into this work.

I know for myself that had somebody sat me down, asked what was going on and what I thought might have made a difference, I might have stayed connected to my community, kept my job, and my life would’ve been so different. Although I was in a lot of distress and I was scaring people, I was still able to communicate, and an outcome that was really different to what happened could have been created.

I know that this can happen because I’ve seen it happen hundreds of times. And I know of thousands for whom this has been possible. So for the past 16 years or so, intentional peer support has been my work.

That’s about developing community-based alternatives to psychiatric hospitals and to the deeper clutches of the mental health system. It’s about connecting people with their lives and with their families and the world, their communities of choice, and teaching a framework through which to think about relationships that are focused on being present and connecting, no matter how difficult things are, rather than on “helping,” coercing, or “doing to.” […]

John is a person I knew who would regularly go and lie horizontally across the line of the highway because he felt sure it would bring peace to a war-torn part of the world. The first time this happened, police were called; he was cuffed, put in the police van, and spent time in forensic services.

The second time, mental health was called, and he spent months in the hospital. Both times he lost his job, his house, most of his possessions, and his sense of who he was. But the third time it happened, a stranger courageously walked to the middle of the road, held up his hands to stop the traffic, bent down, grabbed his hand, and whispered, “Come on, mate – let’s go and have a cup of coffee,” which he did this time.

There was no hospital, no job loss, just a bunch of conversations, which were sometimes scary and sometimes difficult. But I tell this story because that’s the sort of connection I know is possible. So to me, Mad Pride is about being willing to own and celebrate my own madness and that of those in my community. […]

It’s about seeing distress, extreme states, feelings, beliefs, and behaviors as normal responses to the madness in our world and nothing to be ashamed of. Some say the word namaste can be translated as “the divine in me honors the divine in you.” If the divine is all-encompassing, it also includes our madness and our extremes. So for Mad Pride, I say namaste: the mad person in me sees and honors the mad person in you and in all of us.

Today is a day of celebration and a day of joy for our community – which makes me a little uncomfortable. I do want to celebrate, and I do want to experience joy, and I also want to be real about how I’ve been feeling lately and how I feel often, which is exemplified by a lot of conversations that I’ve had recently. […]

Psychiatric survivors, mad people, we have not necessarily just sat around and waited for the government to pass just laws. We haven’t sat around and waited for the mental health system to grant us dignity and choice. We have fought for it. We have marched for it, and we have built our own communities and our own support because we know how to take care of each other and ourselves on our own terms. […]

And I guess what brings me back to the assurance and the joy and the celebration is the fact that those of us that society has dismissed and displaced have so much to share with the world – especially now that more and more people are looking around and asking, “What do we do? What is coming? What is happening?” We have been there, and we’re going to do what we have always done.

When I wanted to start an organization that fought against discrimination against people with psychiatric histories and was deciding what to name it, I selected MadFreedom.

There’s something to be learned there. And so the world is a challenging place. And it’s hard to figure out what to do, but what you can do, what every one of us can do – the most radical thing we can do – is to be who we are, is to say it loud: I’m mad, and I’m proud.

In a training on non-violent direct action. I was in some years ago, I remember a trainer paraphrasing, maybe, that amazing lesbian Barbara Deming, saying that “Creativity is the opposite of violence.” There’s so many ways our current systems – policing, psychiatry, social services, and beyond – suppress not only people living their lives more fully, but often stifle human creativity, both for the people working in them, but especially for those within these systems.

I remember spending time at a mixed forensic psych ward in Springfield, Massachusetts, when working with the Wildflower Alliance years ago, and coming up to the unit shaking with rage often. So much of what clinical teams and courts forced upon people held there against their will was not only disrespectful, inhumane, and narrow-minded, but it also was so destructive towards the creative ways people were trying to survive.

One vivid memory I have is accompanying a friend there for a treatment team meeting. We were both eager for a clear account about what he needed to do for discharge. He’d been there for four years at that point. The first thing staff said was, “Have more reality-based conversations.” They clarified that this would mostly involve him admitting and accepting he was schizophrenic.

On the contrary, he believed – and I did too – that he had the ability to connect with many people living or dead that no one else could see in the room that gave him support and advice. What is reality in these exchanges? And how is a single reality defined but with force and coercion so often, and why is that the case? […]

The late and great transgender warrior and revolutionary communist Leslie Feinberg wrote years ago that “My right to be me is tied with a thousand threads to your right to be you.” This reminds me, in times when there’s great chauvinism and greed in this country, that the work of bringing into being the world we want, alongside the wonder of experiencing Mad Pride, are not solitary acts.

We’re all here together. Right? I did speak this speech into a mirror earlier,  and it didn’t feel as nice.

Poet e e cummings said, “To be nobody but yourself in a world which is doing its best day and night to make you like everybody else means to fight the hardest battle which any human being can fight and never stop fighting.”

I put that under my yearbook picture in my senior graduating class, and I didn’t really live it. I hid my symptoms because I was ashamed. I blamed myself. I made myself inferior and I lived hiding.

Ten years ago, I went to Alyssum. Alyssum is a farmhouse retreat in Rochester, and anyone who is a Vermont resident and has emotions can go free. And there I said, “No more.” […]

So I wrote a book, my memoir. […] It’s called Living with the Neighbors because every day I had neighbors in my life. Those are auditory hallucinations that I hear every day that I cannot get away from.

And so my book is called Living with the Neighbors as if it was just through a wall, just something that I happened to have. And so 10 years ago, I said, “I’m not gonna hide that I hear voices anymore. I’m not going curl up in bed and pretend that that I don’t have this real symptom.” […]

There’s a lot of possibilities in life, and I am Jodi. I am nobody but Jodi, and Jodi hears voices, and that’s OK.

This is of those moments of joy that I look for in my life, looking out and knowing, and seeing this action, that we have collective power.

We have our collective experiences of often being told by society that we shouldn’t have families, have jobs, live on our own, that we need to be fixed and that our experiences are not normal. We come together, and we know that’s just not true.

Together we have power, and we’ll fight the fakeness of society telling us that we don’t, and we are celebrating all of that today.