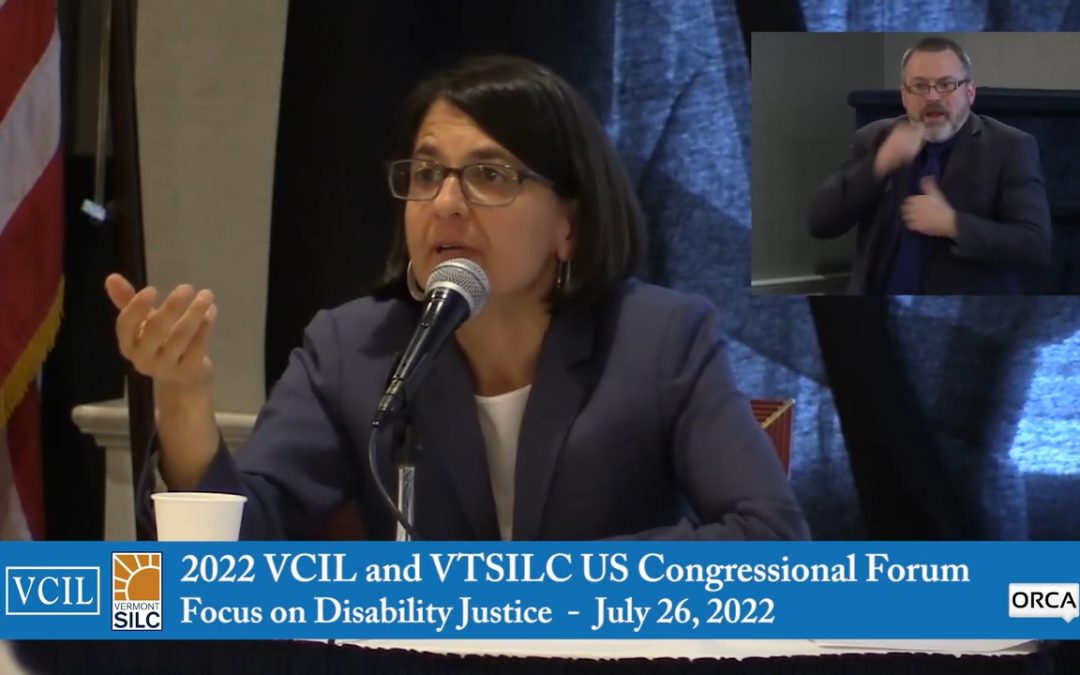 “Part of our mission is to encourage people with disabilities to understand and be involved in the election process, from voting access and running for office and becoming involved in the political process yourself,” VCIL Executive Director Sarah Launderville said.

Four candidates for Vermont’s at-large seat in the U.S. House of Representatives answered questions “submitted and vetted by members of Vermont’s disability rights community and independent living community,” in the words of Vermont Public journalist Peter Hirschfeld, who moderated the event. These candidates included Becca Balint and Liam Madden, who would go on to win the Democratic and Republican primaries, respectively, on Aug. 9.

Balint, the outgoing Vermont Senate President Pro Tempore, pointed to her years of legislative experience addressing issues affecting “Vermonters with developmental, intellectual, and physical disabilities.” She also told how her experiences as an LGBTQ+ person, as a person with depression and anxiety, as a middle-school teacher, and as “a mom to a neurodiverse kid” have shaped her commitment to fighting social stigma.

“I bring this experience with me into my legislative work,” Balint said. “I’m always thinking about who needs an ally and how can I show up in allyship in a way that is meaningful, in a way that is helpful

and is not in the driver’s seat – true allyship, which is learning and growing together.”

Balint voiced a range of proposals, from implementing assistive technology in workplaces to changing the “cash cliff” in the Social Security Disability Insurance program to a “gradual phaseout.” One especially significant topic of discussion was housing.

“It isn’t enough just to build more housing. If you don’t have housing that is accessible to all, if you don’t have housing that has wrap-around services and supports, then that’s not actually housing that all people can take advantage of,” she observed. “So I know, at the federal level, we have to not just look at the brick-and-mortar piece of the puzzle – we have to look at making sure that we have the mental health supports, the peer supports, and also making sure that we enforce code regulations as new houses and rental properties are being built.”

Another subject addressed by the candidates was Vermont’s labor shortage and how it has affected programs for people with disabilities.

“As educators in Vermont, we need to do a better job of communicating with students as early as junior high and high school, to say that you actually can have a really fulfilling career in a profession like being in attendant care,” Balint said. “It’s incredibly rewarding, and it’s something that we don’t often talk about within the public schools. We push everybody to go to a four-year college, and that’s just not what everybody needs to do.”

Meanwhile, Madden described a need for a wholesale transformation of American government to “build a just, healthy, regenerative society” that would protect “the most vulnerable among us.” A former Marine and an anti-war activist, he envisioned a “military-scale” public-sector jobs program that would build centrally located, accessible housing and shore up understaffed care facilities and home-based services.

Madden, who works in the solar industry, also advocated for decarceration, energy conservation, wealth redistribution, and electronic ballot initiatives on the federal level. An independent who has never held public office, he encouraged skepticism about the two-party political system’s ability to solve major problems facing the country and planet.

“If you know in your heart that it’s no longer useful to be changing the players but it’s the time to change the rules of the game, then I want you to look at me,” he said.

While hoping to rein in the power of big corporations like Amazon and AirBNB through increased taxation and regulation, Madden expressed a desire to give a leg up to smaller companies by, for example, offering federal subsidies for the implementation of “universal design” principles in their facilities, which larger firms would have to pay for themselves.

“For small businesses, for businesses that meet certain criteria, such as democratically worker-owned [businesses], I think there should be much more support,” he said, “because small businesses are the backbone of our economy, but also the heart of our communities. We need to recognize that they should be treated differently.”

On the subject of mental health services, Madden suggested that the best way to improve their quality and availability was to build a nationwide universal healthcare system. But he also cautioned against viewing mental health strictly as a medical matter.

Mental health, he asserted, depends on people’s sense of “purpose in life, our communities, our connection to the beauty of reality, and the stories that used to hold us together and provide that meaning on a huge arc-of-history kind of time-scale. Patriotism and religion and even just work itself and all of these stories are beginning to weaken and fragment for lots of large historical-force reasons, and we kind of have a God-sized hole in the psyche of our civilization. And if we don’t fill that with community, and we’re not willing to invest in the infrastructure that supports communities’ well-being, we’re not just going to have a God-sized hole; we’re going to fracture as an entire civilization.”

The forum took place on the 32nd anniversary of the signing of the Americans with Disabilities Act. A celebration, with speeches, songs, and cake, followed.