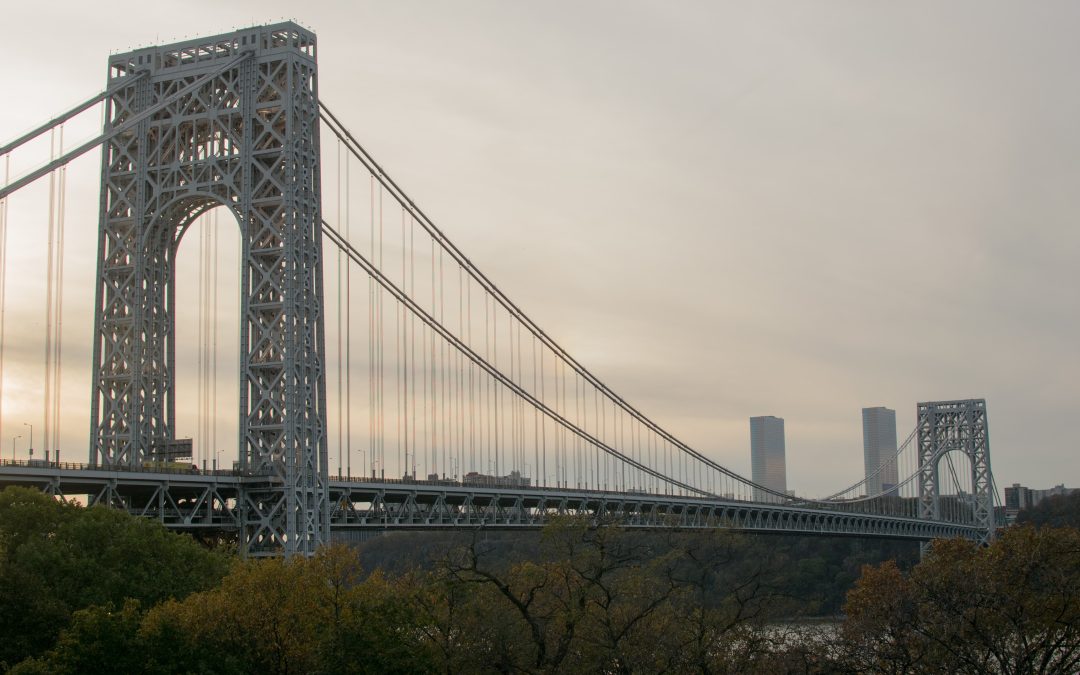 The Jaltsens lived in New Jersey. Walking through Manhattan after a concert we attended with them one night, my husband asked if they’d be taking the George Washington Bridge home.

“Oh, no!” Alice responded. “It’d be much too big to fit into our apartment.”

Alice’s husband and mine were colleagues in the same law firm. The evening of that concert was the first time the four of us had gotten together. It was also the first time Josh and I met Hal’s wife Alice.

“Barbara didn’t mean to ask if you’d be taking the George Washington Bridge home with you,” my husband clarified. “She meant, would you be driving over it on your way home?”

“I know,” giggled Alice. “I was just joking.” Walking next to me, she jabbed her elbow in my ribs.

“You’re Sorry?” her husband asked. “I thought you were Alice.” Both of them doubled over in laughter.

After they left us, I asked Josh if Hal acted like that at work.

“No,” he said. “It must just be the way he and his wife communicate.”

I learned sometime later that Alice had been diagnosed with a newly coined disability: Asperderitidinal Perplexitrous Syndrome. Among other symptoms is a compulsive sense of humor that influence those affected to interpret every word said to them as if it were literal. Apparently, they find that hilarious.

Several weeks after that evening, Hal and I were at the same party as the Jaltsens. Talking with someone a few feet away from Alice, I overheard a man tell her  “I don’t mean to say you’re crazy. It’s just that so many people are doing it today: have you ever seen a psychiatrist?”

“Oh, I don’t know. I may have seen dozens!” Alice told him. “Do you go up to people on buses and in the streets and ask if they’re psychiatrists?”

Everyone around Alice burst out laughing.

She didn’t. That – plus the fact that, unlike in our conversation after the concert, she didn’t mention that she was joking – made me wonder if a second diagnosis, in addition to her compulsive sense of humor, might be necessary.

Looking hurt, Alice reached into her pocketbook and extracted a pill. Without excusing herself, she headed for the bathroom. When she came back, I could have sworn her hair was parted on the side of her head opposite where it had been before she’d left. She’d also apparently rubbed eyebrow pencil off one of her eyes and used it to paint the other side of her face with a thick black curve up to her hairline.

Noticing me taking in these changes, she said, “The medication for my condition works better this way.” Then she followed that with another “I’m just joking” remark and jabbed an elbow in my rib cage again.

Entering our house that night, I erupted in laughter. I must have been holding it in. Walking through our front door, a safe place, I exploded, “I can’t believe she’s for real!”

Josh grimaced; then, poking my rib cage with his elbow, he exploded, too. Contagious hysterics are doubly hard to control. They continued, interspersed with my imitations of Alice, through the lovemaking we managed that night.

Alice’s husband had not been diagnosed with Aspereditinal’s. It didn’t occur to me until I was waking up the next morning to wonder why in that case he’d offered his own “You’re Sorry? I thought you were Alice” on that night we met her.

Josh had already left for work. The sun was shining through our east-facing window, and I was staring at the ceiling, feeling not particularly like getting out of bed. Then the phone rang.

Having reached for it on my bedside table, I heard a Ruth Ashenon explaining that Alice had applied for a job as a receptionist in a chiropractor’s office. She’d given my name as a reference.

“She gave your name as a reference. Not to vouch for her professional abilities, just for her character, her general ability to function in an occasionally stressful environment. Preliminary information.” I was speechless. “Can you vouch for her?” the woman asked.

“Is there a problem providing a reference?”

I didn’t, of course. Neither did I call Alice to ask what prompted her to give my name as a reference.

The next time I saw Alice was on the sidewalk a block from our house. I’d been shopping. Alice was having trouble controlling a dog on a leash.

“Alice! What brings you to our neighborhood?” I asked her.

“I’m walking my dog,” she answered.

“Oh…” Before she said “my dog,” I’d assumed it must be the dog of a friend in this area that she was taking care of. “But… why did you come from New Jersey to walk him in Manhattan?”  I asked her.

“I don’t know.” She looked confused. She didn’t mention anything about the chiropractor job. So I asked if she’d like to stop up to my place, join me for a coffee or something.

I’m concerned about you, I wanted to say. But that sounded tactless. Instead: “Um, are you feeling all right?”

Climbing the staircase to my living room, I heard Alice’s dog howling. She’d tied him with a leash to a lamp post.

“Her name’s Anita,” Alice mentioned. “She’ll calm down after a few minutes.”

“Silly of me to imagine all cats are female, all dogs male,” I said.

Alice smiled. Slightly built, with a mauve cashmere sweater buttoned neatly down her front, she didn’t look like the type who’d poke people in the ribs.

“I can understand your misconception,” she said, sitting sideways, her legs crossed on my couch. “Eighty-nine percent of dogs are male.”

“What? Where did you hear that?” I was studying her.

“Once every three and a half years,” she told me.

This is getting us nowhere, I thought. It seemed overdue, so why not just broach the topic? “Some people think you say strange things,” I ventured.

“Well, everyone says them from time to time.”

Strange things: the phrase itself? I thought I was beginning to understand her gist, how her mind worked. Her dog had stopped howling. I started wishing she hadn’t.

“Josh and I have never had a dog who howled when left alone,” I said. “Yours has quieted down, but my heart goes out to them when they’re left waiting for their owners. The longer they wait, the more anxiety they experience. That’s not healthy…”

“Oh, I didn’t mean that,” I said. But walking toward the door, she didn’t show any sign of hearing me. I wanted to yell, I meant I’d like you to leave! Oh God, why had I invited her up in the first place?

Around five minutes passed. Alice had not come back upstairs. Leaning out the window, I noticed she was sitting cross-legged on the sidewalk. Just as I was about to yell down to ask what she was doing, she stood up and started walking down the block. Still tied to a railing, her dog didn’t bark for some reason.

“I’m coming back for her,” she shouted.

But an hour and a half later, she hadn’t.

I called Josh at the office. He said he’d tell Alice’s husband what happened. A few minutes later Alice returned.

Ringing my doorbell, she started singing before I could buzz her in: “Strangers in the Night.” She sounded more like a baritone than a soprano.

Once more, I leaned out the window. “Sorry I can’t invite you in again. I just got a phone call and have to be out of the house in five minutes.”

“Oh.” Then, untying her dog’s leash from the railing, she bent to her ear to ask where the nearest airport was.

As if the dog understood, it started walking. Alice unleashed her and followed from behind.

“Alice! The dog doesn’t know which way the airport is!”

But already down the block, neither the dog nor Alice heard me.

When Josh got home that night, he asked what happened after I’d phoned his office. Telling him, we both wound up laughing uncontrollably again.

This time, my preposterous admonition that the dog didn’t know where the airport was had triggered our hysterics. But after a while, my amusement began to make me feel guilty.

“Her humor – if that’s what it is – has a sort of adolescent quality… pubescent, don’t you think? Like kids looking for silliness to make them giggle as their changing bodies make them tense. They want outlets, a release,” Josh hypothesized.

Before the evening ended, we phoned Alice’s husband.

“You needn’t worry,” he told us. “Alice is here. She always comes home.”