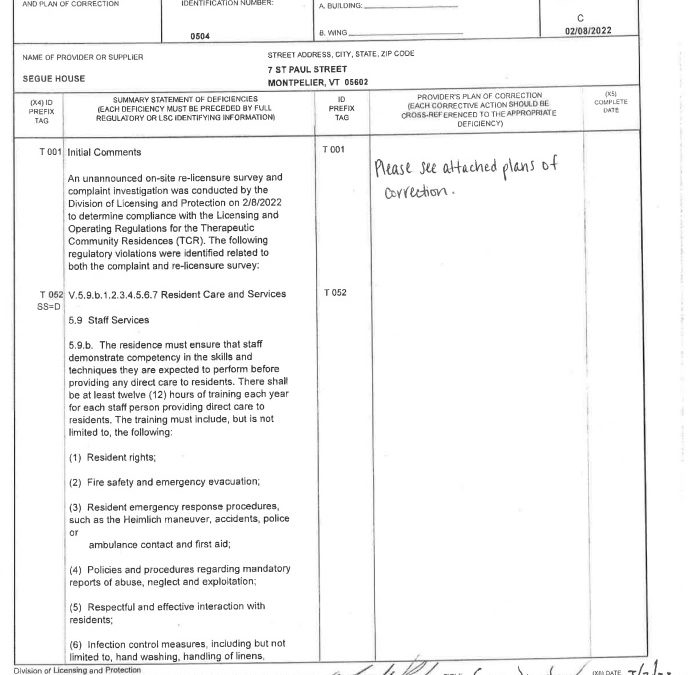 The Department of Disabilities, Aging and Independent Living’s Division of Licensing and Protection (DLP) conducted an “unannounced on-site re-licensure survey and complaint investigation” at Segue House in Montpelier in February. The state regulators identified compliance violations in nine categories.

Washington County Mental Health Services operates Segue House as a “therapeutic community residence” (TCR) at 7 St. Paul Street. According to DLP, 39 such facilities across the state house “people who are experiencing problems in coping with such difficulties as substance abuse, psychiatric disabilities, traumatic brain injuries, cognitive and developmental disabilities, family dysfunctions and delinquency.”

These homes “tend to be small and characterized by the sharing of a common life.” Official regulatory documents state that DLP “shall inspect a residence prior to issuing a license and may inspect a residence any other time it considers an inspection necessary to determine if a residence is in compliance” with its rules, including the obligation to maintain a “homelike and comfortable environment.”

DLP’s visit to Segue House revealed shortcomings in sanitation, fire safety, and resident care. The first citation pointed to internal records showing that two of five employees had not completed their 12 required hours of annual training.

The second recorded violation arose from a failure to observe a resident’s “right to have accommodations made to a disability,” based on the experience of a sleepwalker who, assigned to a shared third-floor bedroom near a “steep staircase,” had suffered injuries. Because noise at night appeared to exacerbate the patient’s somnambulism, a neurologist had issued an unheeded recommendation for a private room “with a gate at the door as a safety measure.”

The rest of the citations addressed failures of maintenance and cleaning. In the kitchens, regulators found “food fragments and other debris” on the counters, a dining table “soiled with scattered food remains,” mold inside the microwave, and expired cold cuts in the refrigerator.

One of the bathrooms had a dirty bathtub and an eight-by-four-inch hole in the ceiling, from which oozed a “black/brown tar-like” substance that had stained the adjacent wall. Another bathroom contained a mingled collection of “used disposable razors,” which the residents had been “reusing and sharing” despite the risk of spreading bacteria and viruses. The state of the sinks and toilets led regulators to cast doubt on the manager’s claim that “custodial services come in weekly to clean.”

Meanwhile, the presence of “soiled laundry, trash, [and] soiled dishes” in “odorous” bedrooms betrayed a lack of “any indication of assistance from TCR staff to engage the residents in maintaining a safe and sanitary environment.” One resident spent two weeks without a proper bedroom at all, instead sleeping inside the facility’s “art room,” whose double swinging doors left the resident without appropriate privacy due to their Plexiglas panels.

On March 23, regulators accepted a plan of correction submitted by Segue House’s manager. “We may follow-up to verify that substantial compliance has been achieved and maintained. If we find that your facility has failed to achieve or maintain substantial compliance, remedies may be imposed,” DLP’s form letter warned.

DLP records indicate that the most recent previous inspection of Segue House occurred in 2014. The report from that visit noted several of the same violations.

Dear Counterpoint,
We appreciate the attention you are bringing to residential programs funded by the Department of Mental
Health (DMH). We believe that these programs are an essential part of our system of care and for the residents,
an important part of their journey in recovery. These residences serve people experiencing significant mental
health and often co-occurring substance use conditions, many of whom are at risk for homelessness or
inpatient care. The importance of these programs cannot be understated, nor the effort it takes to maintain
them. Operational challenges were highlighted in the context of the global pandemic which was acutely felt by
the health and human services sector.

The health and safety of the people we serve and those who serve them is of the utmost importance to us and
we are grateful for any feedback that helps us to improve the quality of our services and supports. All findings
from the Vermont Division of Licensing and Protection’s site visit in February 2022 have been addressed, the
plan of correction accepted and implemented. We are currently making significant investments in our DMH
funded residential programs including much needed facility upgrades for accessibility as well as increased
wages for our staff.

Once again, thank you for spotlighting the importance of these residential settings.