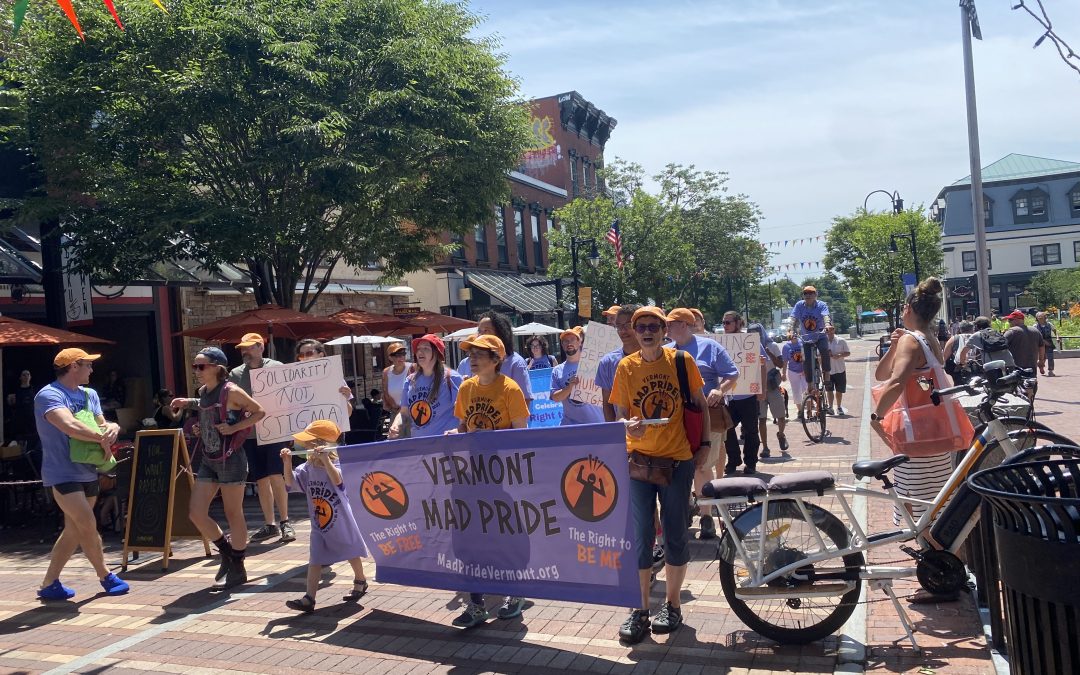 For the first time in three years, Vermonters gathered in the streets for Mad Pride on July 16.

According to the event’s press materials, “Mad Pride is about challenging discrimination against folks the world has labeled ‘mentally ill,’ advocating for rights, affirming mad identities, remembering and participating in mad history and having fun.”

Starting in 2016, prior to the COVID-19 pandemic, annual demonstrations took place in Montpelier, Bennington, or Brattleboro. This year, Burlington welcomed psychiatric survivors and mental health consumers from across the state for a downtown protest and party.

Attendees assembled at a parking lot on King Street to don free commemorative T-shirts and hats before heading north for a procession up the length of the busy Church Street pedestrian mall. Weekend shoppers made way for their banners and signs: SOLIDARITY, NOT STIGMA; COPS DO NOT SOLVE CRISIS; NOTHING ABOUT US WITHOUT US; TO BE TAKEN SERIOUSLY IS A HUMAN RIGHT.

Chants, led by Clare Pledl’s megaphone, prompted outdoor diners to look up from their lunches: “Hey hey! Hey ho! This narrow normal has got to go!” “One, two, three, four! We won’t be patient anymore! Five, six, seven, eight! Every mind is really great!

A pair of double-decker bicycles, with seats as high as a horse’s saddle, also drew curious glances. A minor calamity appeared to strike when one of their riders accidentally bumped into and knocked over a fence of linked planters at Kru Coffee Collective’s patio, but a supportive employee waved off and urged on marchers who’d paused momentarily to attempt to restore the spilled soil.

The group made a left turn on Pearl Street and, with a pair of police cruisers as escorts, continued toward Battery Park as blocked traffic congealed in back. In the park, a free lunch, tents, and chairs awaited, along with a punk concert by Feminine Aggression, a band from Northampton, MA. Nine speakers, two additional musical acts, and a poet subsequently took the stage.

Reflecting an international tradition, Burlington’s Mad Pride Day wasn’t the only one this summer. According to Mad in America, festivities also took place in Bern, Switzerland; Mexico City, Mexico; and Cork, Ireland.