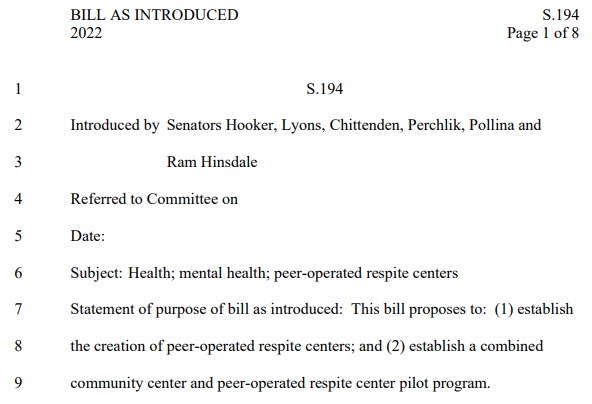 The first week of Vermont’s legislative session saw the introduction of two bills that would dramatically advance the development of peer-based mental health services in the state.

Five peer-led mental health organizations – Alyssum, Another Way, MadFreedom, Pathways Vermont, and Vermont Psychiatric Survivors – drafted the legislation, based in part on a white paper published in 2019. S.194 would establish and maintain a network of seven peer-operated respite centers throughout the state, while S.195 would create an official certification program for peer support specialists. Sen. Cheryl Hooker of Rutland introduced both bills.

The first bill defines a peer respite as “a voluntary, short-term, overnight program that provides community-based, trauma-informed, and person-centered crisis support and prevention 24 hours a day in a homelike environment to individuals with mental conditions who are experiencing acute distress, anxiety, or emotional pain that if left unaddressed may lead to the need for inpatient hospital services.”

The legislation would require the Department of Mental Health (DMH) to distribute funds annually to peer-run organizations that would maintain respites in Bennington, Brattleboro, Burlington, Rutland, Windsor County, and any one of the three counties of the Northeast Kingdom. Currently, Windsor County hosts Vermont’s only peer respite, Alyssum, which operates two beds in Rochester.

As a basis for the proposed expansion, the bill fingers “prolonged waits” in Vermont’s emergency departments, where, however, a “significant number” of psychiatric patients “do not require inpatient admission.” Rather, many “lack social connectedness” and “seek out inpatient hospitalization to ease this social isolation.” Peer respites can “serve as alternative care settings” for these and other patients.

At a nightly cost of $693 per bed, compared to $2,537 at Vermont Psychiatric Care Hospital, they can also save the state money by doing so, the legislation asserts. The bill would appropriate $3.5 million from the state’s general fund in fiscal year 2023 for the seven respites, and a pilot program would send an extra $250,000 to two peer-run community centers in Burlington and Montpelier – where Pathways Vermont and Another Way currently operate such facilities – “for the purpose of combining their efforts” with the new respites in the same locations.

S.195 could help create a pool of potential staffers for the facilities established by S.194. “Certification can encourage an increase in the number, diversity, and availability of peer support specialists,” the bill states, observing that 46 states already have developed peer certification programs.

Under this legislation, the Agency for Human Services would contract a “peer-run entity” to build a statewide curriculum with at least 13 core competencies, including “authentic and mutual relationships,” “trauma-informed practice,” and “group facilitation skills.” The same contractor or another would then “screen and train prospective peer support specialists,” who must self-identify as “having lived experience with the process of recovery from a mental health condition or substance use disorder, or both,” or as a family member of someone with such experience.

The bill defines peer support as “an approach to relationships that recognizes each individual as the expert of their own experience, fosters connection through shared or similar experiences, centers mutuality and mutual support, preserves autonomy, and creates opportunity for meaningful connections and exploring possibilities.”

Through a partial grandfather clause, individuals already employed as peer support specialists could potentially obtain certification through an examination alone, without having to undertake training. Pending an amendment to the state’s agreement with the Centers for Medicare and Medicaid Services (CMS) that would add peer support as a Medicaid-covered service, certification would entitle peer support providers to receive financial reimbursement from the Department of Vermont Health Access “in accordance with Vermont’s Medicaid state plan.” Employees and volunteers at Vermont’s peer-run organizations would fall under a permanent exemption from the certification requirement.

The certification program would cost $525,000 in fiscal year 2023, with the state seeking to “maximize federal financial participation in funding these administrative costs.” DMH has also indicated that, pending budget negotiations in the legislature, it intends to award a $30,000 grant for a preliminary process that would “solicit recommendations” and “input from stakeholders” on the direction of the program prior to its design and implementation under S.195.

The Senate Committee on Health and Welfare received testimony on both bills on Jan. 26. Commissioner of Mental Health Emily Hawes, Vice President Devon Green of the Vermont Association of Hospitals and Health Systems, Department of Public Safety Director of Mental Health Programs Mourning Fox, and Deputy Executive Director Stephanie Winters of Vermont Care Partners all pledged support for the legislation.

Peer leaders appeared before the committee to provide additional information.

In discussions about S.194 and S.195, one question “invariably comes up,” Pathways Vermont Executive Director Hilary Melton observed. “The question is this: do Vermont’s peer organizations have the capacity or the knowledge to get seven peer respites and a peer certification program up and running? The answer is a resounding yes. We are a strong, capable group of organizations.”

Another Way Executive Director Ken Russell contended that his organization’s community center in Montpelier already offers the “person-centered” care described in S.194 – just not yet after dark: “We really do provide a respite from 9 to 5. It’s heart-wrenching when we have to close the doors and somebody has to leave, and they have no place to go. We’ve had folks in various states of extreme mental distress leaving at that time.”

MadFreedom founder Wilda White identified the ability to access federal Medicaid dollars for peer support as a key advantage of codifying a certification program in accordance with CMS guidance. “This bill is intended to increase the size of the pie that we’ll have available to fund mental health services rather than just reshuffling and redividing that pie,” she said.

She argued that the peer support credential would help open up a new career path for psychiatric survivors. Discrimination based on psychiatric labels has led to “disproportionate unemployment” for this group, White explained. “It’s not because we’re not able or not willing to work. Surveys have revealed that employers are just not willing to hire us.”

Both White and Melton pointed to the success of 10-year-old Alyssum as a proof of concept for the proposed respites. “The problem with Alyssum is that it is always full, and there is always a waiting list,” Melton said.

Sen. Ruth Hardy, who expressed a desire to have Addison County added to the bill’s list of locations for future respites, wondered whether local resistance could present a challenge in siting the new facilities.

“We did have pushback at startup,” Alyssum Executive Director Gloria van den Berg acknowledged. “We did have to talk with the town. We had many meetings. They required us to do an additional screening process to start up, which has been helpful in the long run for us.”

Since then, per van den Berg, any opposition has dissolved. “We have gotten letters and videos of our neighbors and townspeople thanking us for having Alyssum in their community. I have people come up to me on the street and say, ‘We’re so happy you’re here.’”

Two-bed respites, such as Alyssum and the new ones contemplated by Vermont’s peer-led organizations under S.194, don’t require licensure by the Department of Disabilities, Aging and Independent Living’s Division of Licensing and Protection or, with a cost under $1.5 million per facility, a Certificate of Need from the Green Mountain Care Board. According to van den Berg, in residential areas, they may need to obtain local zoning variances, as Alyssum did.

A mental health consumer, Linda Limoges, described her own experience at Alyssum. “A few years ago, a very sudden and unimaginable trauma occurred, which totally shattered the lives of those involved as well as my own,” she recounted. “My sense of self was greatly fractured, but my sense of hope was restored by the constant support of those at Alyssum. I regained my will to live, and I found my way through my grief with meaning and purpose.”

“The reason peer support worked so well for me was that I knew that each person working with me truly understood my circumstances through common experiences,” she continued. “My wish now is that the lives of other Vermonters may be enhanced as well through implementing additional programs.”