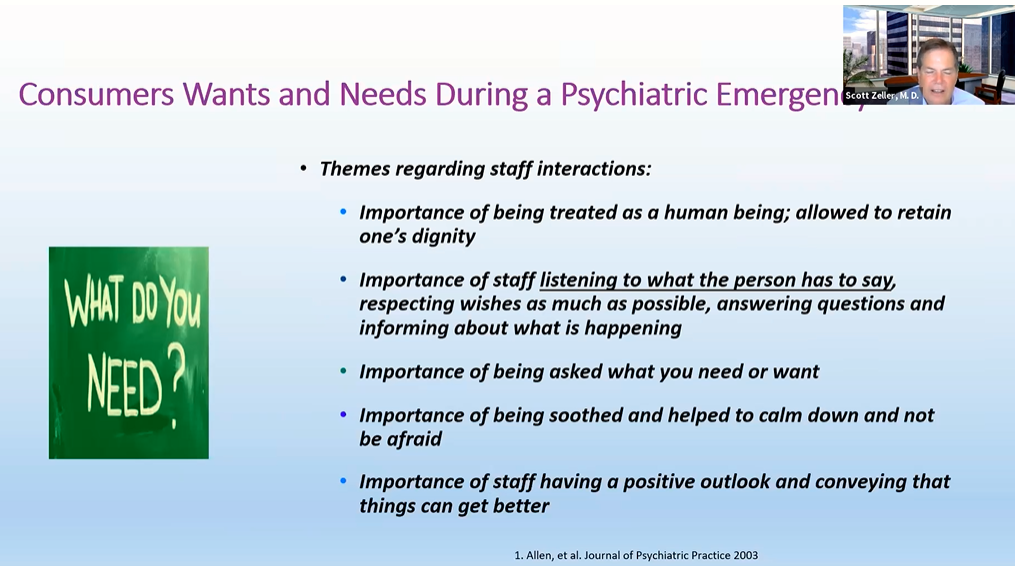 MONTPELIER – With new attention to the increases in emergency room use for mental health crises, a national expert was brought in for a conference this summer to advise local hospitals about improving the quality of care.

He proposed a model called EmPath – emergency psychiatric assessment, treatment, and healing – which creates a more welcoming space in a separate part of the hospital where treatment can begin, and average stays are less than 24 hours.

The model aligns with many features proposed by psychiatric survivors except for the most basic one: that it be peer-led and community-based as an alternative to hospital ERs.

More that 100 people attended the conference by Zoom, about half from area hospitals and the rest from a broad array of providers, state administrators, other health organizations and the public, according to the Vermont Program for Quality in Health Care, which co-hosted the event with the Vermont Association for Hospitals and Health Systems.

Scott Zeller, MD, asserted that it was “wishful thinking” that community crisis centers could keep people out of ERs because their exclusion criteria limited them to help those with “mild to moderate symptoms.”

He said he supported such crisis centers, but people in severe crisis still end up being sent to ERs, and that it is there that “we need to change the whole mindset” to be able to actually help people instead of leaving them to wait for days for a transfer to an inpatient bed.

Zeller is Vice President for Acute Psychiatry at Vituity, a hospital consulting group, and spent years as an emergency room psychiatrist.

He described the problem as an ER perspective that its role in psychiatric care is to do medical screening and “send you to a psych hospital.”

The increase in emergencies and lack of beds results in days of waiting, and people who are “often in a lot of anguish” are left suffering and sometimes escalate into aggression, he said.

Those responses are then seen as criminal behavior and the response is to call security, use restraints or call the police when these are actually symptoms of an illness, he added.

He likened it to telling a person, “stop having that asthma attack or I’m calling security,” instead of intervening in a way to help someone reduce their symptoms.

Zeller stressed the need to listen to patients and ask, “how can we help,” even when “it might be a little more difficult to understand” a person who is unable to express themselves clearly.

Patients should not be prejudged or told what to do, he added.

He argued strongly against using restraints, including involuntary forced drugs, and said there needed to be more focus on avoiding coercion. The history of ER response has been for the first reaction to “lock people into psychiatric units” when much less restrictive options could help someone.

He urged that hospitals take a trauma-informed approach to “avoid things that would retrigger” the trauma already experienced by most people with mental health symptoms.

Zeller added that psychiatric emergencies need to stop being put “at the back of the line” when patients are triaged.

That reflects “disdain for what people are suffering,” he said.

“What if you wanted to die this minute – what that must feel like,” or you hear voices directing you to hurt someone; “how agonizing is that?”

He urged doctors to understand mental pain in the same way they understand physical pain: “think of the worst headache in your life.”

Zeller opined that treatment should start in an ER rather than simply holding people for days using sitters and, often, restraints, including drugs.

He said there are medications for addressing anxiety or other symptoms that help “chilling people down instead of knocking them out” and enable providers to engage with them.

By the time the transfer is arranged for someone who was screened as needing hospitalization, the person “may be doing so much better [they] may be able to go home,” he added.

All of those goals can be achieved with the EmPath model, Zeller said, by creating a calming, healing environment in a separate area where those in a mental health crisis can move to after a quick review to ensure there is no medical cause for the symptoms.

He said that no one should be excluded; even people with “super high acuity” will respond when you “take away all the things that get people angry or upset.” There is a voluntary calming room rather than seclusion, and in Empath units, there is a restraint rate of only one per one thousand patients, he added.

The Empath unit features a large open area for shared support, chairs that can open up for sleeping rather than beds, and “no fishbowl” for nursing staff, who instead mingle directly with patients in the open environment, Zeller explained.

That also means that the cold feeling of a “ligature free” space can be avoided because regulators accept that the risk of self-harm is addressed when staff are constantly present, Zeller told the audience.

The use of EmPath units has shown up to a 75% reduction in the number of patients who would have been hospitalized because “people are having their needs met more quickly,” he said – and 75% stay less than 24 hours.

Although used at hospitals of many different sizes with different types of space, “it’s the philosophy, not the particular size of shape” that makes the difference, he told the group.

The model helps children, although they have different needs that must be addressed in a dedicated space, Zeller added.

“They’re still kids,” he said, and a lot can be done with the environment, including a “Kids Kit” for activities and distraction and fewer institutional features.

In responding to questions at the end, Zeller touched on several subjects specific to Vermont.

When one hospital representative raised the question of patients who are on a “psych hold” and refuse even medical tests that are necessary, Zeller responded that he had “strong feelings about that” – that “patients have a right to treatment that can exceed their right to refuse treatment” when it is deemed a life-threatening condition.

“We can’t get too hung up on, ‘well, is this legal or not?’” when it is an issue of saving lives, he said, drawing a parallel to giving Narcan without the consent of a person who has overdosed. He said the legal standards were different in an emergency room from on inpatient units.

That brought a response from Jack McCullough of the Mental Health Law Project, who argued that forced medication “is a big, big deal.”

“I agree,” Zeller replied. “It’s an assault” and should not happen unless a person is “so sick, so acute” that it is necessary. He said the goal must be to “make that number as tiny as possible.”

Other hospital representatives raised concerns that the small size of many Vermont hospitals meant they didn’t have the resources to create a unit like what Zeller described; they did not even have access to on-call psychiatry except by telehealth doctors who only do screening.

“We need a centralized psychiatric ED,” one suggested.

Zeller responded that many EmPath units became centralized response facilities serving more than one hospital; one in California takes referrals from 11 hospitals. Even without that, small hospitals can still implement some of the features and philosophy of the approach, he added.

Psychiatrists who provide consultation need to take ownership for initial care and say, “here is a treatment plan” and “here is what you should be looking for” while the patient is in the ER, not just say “yes or no” to the need for hospital admission, he said.

“That always breaks my heart” when he hears about such dismissive consulting physicians, he added.

In a near-final question, workforce availability
for new EmPath units was raised, and Zeller responded by saying that having versatile nursing staff on-site in a hospital helped with that issue.

He went on to add that EmPath units were an ideal setting for support from peer workers.

“I love to have peer support specialists,” Zeller said. “They are so amazing. They’re 10 times their worth in gold.”

“I have yet to hear of people saying they wish they didn’t have peers. Quite the opposite. It’s like, ‘Why can’t we have three more?’”