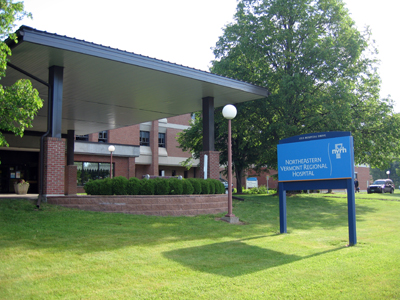 JOHNSBURY – Regulators found Northeastern Vermont Regional Hospital in violation of rules last spring for using peer support and other non-hospital support staff to monitor patients waiting for a psychiatric inpatient bed after an 11-year-old boy ran away from the emergency room.

The regulators returned two months later and cited the hospital for new violations based on an incident in which a contracted sheriff’s officer chased a patient into the parking lot after the patient became upset during a mental health screening and ran out of the emergency room.

The patient was “physically subdued … brought to the ground, and handcuffed by the sheriff,” then returned to the hospital in the handcuffs and transferred to four-point restraints and medicated, according to the licensing report.

Hospital CEO Paul Bengtson is trying to push back against what he calls a “gap between regulatory requirements and what’s actually required to support people who arrive at emergency departments.”

The surveyors representing the federal Centers for Medicare and Medicaid Services told him, “You’re supposed to keep the kid from running away.” On the other hand, if attempting to stop someone, “you can’t touch them,” Bengtson said.

The cadre, a program of Northeast Kingdom Human Services that uses on-call peer support and agency staff to respond to crisis situations, is the kind of presence Bengtson wants in the ER, he said.

“The more we can use people who know people from the area,” the better, he said, in trying to support patients who sometimes wait for days for a transfer to a hospital with an available bed in a psychiatric unit.

“The solutions that are being required are very costly and, in my opinion, unnecessary,” Bengtson said. “We will have to spend hundreds of thousands of dollars for no added value.”

The hospital submitted its annual budget to the Green Mountain Care Board with a line item for $245,000 in additional funds to meet the CMS requirements.

The second inspection by CMS in June was a follow-up to check on compliance with a plan of correction after the runaway incident cited in April, and it was then that the surveyors learned about the takedown and handcuffing of the second patient who had attempted to leave.

CMS has consistently barred the use of law enforcement personnel or handcuffs in patient care, citing both the Brattleboro Retreat and Brattleboro Memorial Hospital in the past for such violations.

The report said that an insufficient staffing response at Northeastern Regional had resulted in “a failure to prevent non-hospital staff from placing hands-on [the patient] which consequently resulted in [the patient] being subjected to both physical restraint by a sheriff and having handcuffs applied, although [the patient] was not in custody of law enforcement, but remained a person in need of psychiatric services and hospitalization.”

The patient was not on an emergency examination hold at that point, based on the report, since a psychiatric evaluation had been ordered but the screening interview had just begun when the patient became upset and walked out. The report said the patient described themselves to staff as being “aggressively suicidal” while leaving.

In the earlier situation, the 11-year-old darted out of the emergency room after being told he could not remain with a parent who was in the waiting room and while the one-to-one observation was being provided by “non-hospital staff,” the CMS report said.

The boy had been waiting for a transfer to the Brattleboro Retreat since the prior evening after making suicidal threats. A missing persons report was broadcast widely, including in news media; he was found more than a day later.

Since then, the cadre, a decades-old program, has not been receiving calls for ER support, Rene Rose, a peer leader and trainer, said in July.

“Nobody’s been called for months,” she said.

Bengtson said at a meeting of the NEKHS program standing committee with Rose and others in July that communications needed to be cleared up because the cadre was still eligible to provide assistance. In mid-August, it still had not been reactivated, according to Rose.

Bengtson has appealed to his county’s state senator, Jane Kitchell, for help in answering “how can we communicate with the regulators and say, ‘Here is a better way’” for delivering care, he said.

Kitchel said the issue Bengtson raised in the meeting was new to her. Although well aware of the crisis that emergency departments are facing because of lack of resources for people arriving in a mental health crisis, she did not know about the role of regulatory pressures, she said.

The failure to have adequate mental health resources in the state means “we’re increasing the risk that [small community hospitals] are going to be in violation” under CMS as they try to maintain patients, she said.

Kitchel said she will be seeking to meet with the Secretary of the Agency of Human Services to discuss how to reduce inconsistencies between CMS requirements and standards of care set by the Department of Mental Health as “a good starting place” to address the dilemma.