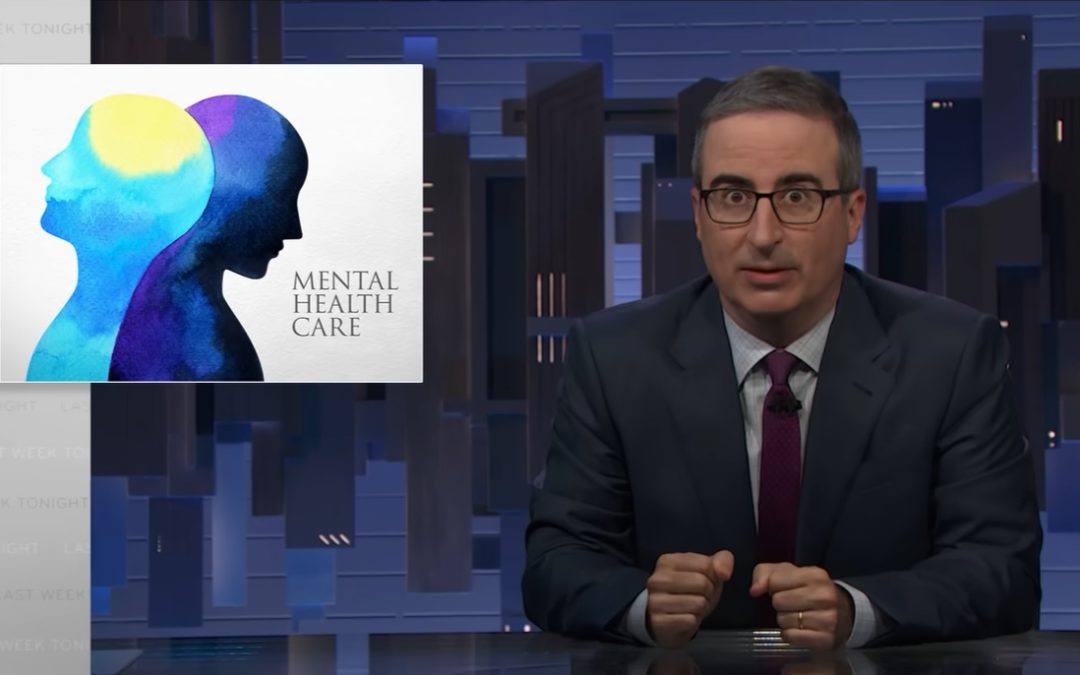 How should psychiatric survivors and ex-patients interact with mainstream progressive demands for a fully funded mental health system?

On July 31, the popular HBO show Last Week Tonight with John Oliver aired a 25-minute video essay about mental healthcare in the United States. It begins with old-timey black-and-white documentary footage of psychiatric nurses inside a beauty parlor.

The nurses are attending cosmetology classes with the expectation of passing on lessons in make-up and coiffure to their female patients. The 1950s rationale, it seems, was that if women with diagnoses of depression could learn how to prettify themselves, they’d soon find reason to cheer up.

Today, Oliver assures the viewer, most Americans have a far more enlightened attitude toward the seriousness of mental health. Unfortunately, the system continues to let them down due to a dearth of available mental health professionals. For rural Americans in particular, the challenge of finding a therapist or counselor can be insurmountable.

Oliver also holds government agencies accountable for lax enforcement of mental health parity laws, which has allowed insurers to get away with refusing to cover psychiatric treatments. Silicon Valley startups have attempted to fill the void with iPhone mental health apps, but a short clip of a text-message interaction with an automated therapist called Woebot demonstrates the inadequacy of such solutions.

The real answer, as put forward by Last Week Tonight, is an increase in the number of psychiatrists and psychologists, along with a guarantee of reliable access to their services, preferably through a single-payer healthcare system. Oliver praises a plan released by the Biden administration to invest $700 million in mental health workforce training and loan forgiveness in underserved areas.

“In the past, so much of the problem here was that people would not ask for help, and thankfully that’s now less of an issue,” the liberal host observes. “But now when people do reach out for help, we’re just not in a position to give it to them.”

There is, however, a logical incoherence in this presentation: the portrait of our benighted mental health past, at the start of the program, was not one of hidden, untreated suffering. Whether women in the 1950s had the opportunity to ask for help or not, the ones in the video in any case received it. The problem was the nature of the “help” to which their society subjected them, not their inability to request it.

What if mental healthcare in America has not evolved as much as one might assume from the days when medical professionals believed that despondent women needed little more than a new hairdo in order to find the will to carry on? What if psychiatrists continue to view their task primarily as one of reshaping dysfunctional individuals to fit a narrow definition of normalcy?

And what if the coping strategies imparted by professionals to fend off the mental health crises that interrupt day-to-day functioning and productivity cannot address the root of an individual’s problem – which, in the end, may not be within the individual’s control? What if the psychiatrist’s own conception of their role in society and in the lives of their patients actually precludes them from taking any meaningful action against the broader conditions that generate psychological stress?

For empathetic people who themselves have known only sanity, the case for boosting standard mental health services is straightforward. On the left side of the political spectrum, especially, the social democratic ideal centers a robust welfare state with universal access to a wide range of public goods, including well-funded mental healthcare. For psychiatry’s skeptics, the question is how to disentangle and challenge support for coercive or ineffective services from a broadly agreeable demand for generous government spending to improve people’s lives.

Specifically, how does one do this without unwittingly endorsing the neoliberal project of delegitimizing and slashing the social safety net as a whole? Some intellectual historians have observed that left-wing theorists of antipsychiatry like Michel Foucault fundamentally failed to resolve this problem, and their critiques of state power finally accommodated Ronald Reagan’s vision of rule by the market.

Activists’ 2020 call to “defund the police,” though a failure on almost every level, represents a clear model for complicating the general perception of a particular form of government spending without otherwise sanctioning a retreat from the provision of public services. The abolitionists may not have abolished anything, but they have helped ensure that police departments occupy a separate political category from, say, public libraries, though both make use of municipal tax dollars.

In fact, activists have consistently made the case that public libraries, public schools, and public housing could receive more funding if not for the exorbitant cost of policing. Unfortunately, their other go-to move frequently has been to promote the mental health system as an alternative, less deadly means of social control for individuals who contribute to disorder.

Another tactic that can be used by psychiatric survivors is to counter demands for more psychiatrists with equally loud demands for more peer supporters. In other words, the need for mental health funding remains; it just needs to go somewhere different.

In the face of state legislatures hostile to transformative change, however, advocates typically present peer support as a supplementary request, not as the basis for a new mental health system intended to prefigure a radically humane and egalitarian postcapitalist future where the need to outsource emotional support to professional services would ultimately disappear altogether. Within the current political context, the best argument for peer support is that it can fill gaps in the existing mental health system relatively inexpensively because the workers don’t command high salaries.

In the end, however, this claim portrays peer supporters as cheap and presumably shoddy replacements for credentialed mental health experts. The progressive instinct – particularly in political spheres that regard “believing science” as a crucial tenet in a battle against right-wing populism – would be to spend more and get the real thing: someone with an MD or PhD.

Though misguided in this case, the instinct demonstrates an underlying fiscal generosity, and in response, critics of the mental health system should emphasize the generous nature of their own designs. In truth, it is psychiatry itself that most frequently operates as a cut-rate, back-end fix for society’s big problems, which our political system cannot find the money or the will to solve.

“Mental health problems are a big driver of homelessness,” Oliver observes, for instance. This claim, meant to bolster the case for mental healthcare, also bolsters the presumption that people who lose the ability to participate in market society should also inevitably lose their homes.

But why shouldn’t everyone have a home, regardless of their mental state? If they don’t, the problem is housing policy, not healthcare policy. In the eyes of many psychiatric survivors, Oliver and others have the equation backward: it is the traumatic, stressful, alienating experience of homelessness that gives rise to responses and adaptations to which psychiatrists apply diagnoses and labels.
It is only after the recognition that mental health is not predicated solely upon the availability of mental health services – it is predicated upon everything – that one’s real progressivism on the issue is tested. Psychotherapy is expensive, but building a new society would cost even more.