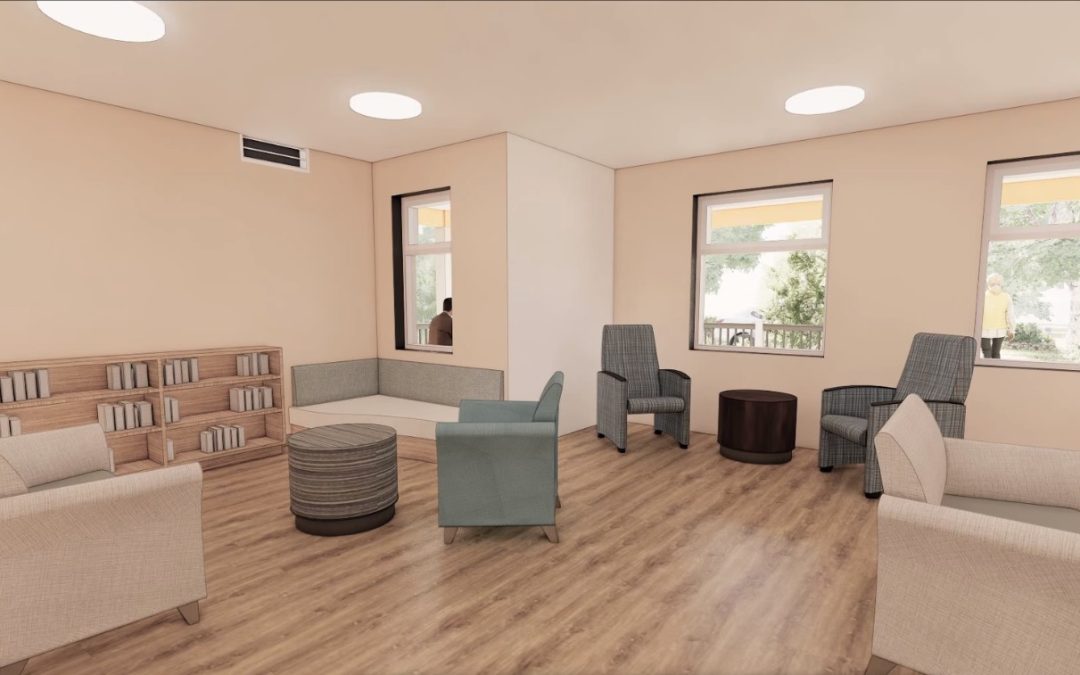 The 16-bed “secure residential recovery facility” will replace, at more than double the capacity, a pair of nine-year-old FEMA trailers in Middlesex that, after Tropical Storm Irene flooded the Vermont State Hospital, began to house psychiatric patients who, according to DMH, “are no longer in need of inpatient care but who need intensive services in a secure setting.” Psychiatric survivors protested the introduction of additional locked capacity to Vermont’s mental health system and particularly opposed plans to allow for the use of restraint and seclusion, which DMH dropped last year.

The virtual meeting in March represented the tail-end of an engagement process that, according to Barber, had included patients at Middlesex and at the Vermont Psychiatric Care Hospital (VPCH), staff at both facilities, and DMH employees. The presentation’s slides offered the first public glimpse inside the residence as imagined by its designers, with computer-generated images of nine mostly beige rooms featuring plastic laminate and “wood look” luxury vinyl tile (or, in some cases, rubber sheet flooring).

In the proposed design, still subject to potential revision, the facility’s bedrooms will come in three color schemes, with a uniform layout featuring a bed, a desk, a mirror, storage shelves, and an upholstered bench beneath a window. The living room will contain five lounge chairs, three love seats, and, according to Parah, a TV “on the wall that you can’t see” in the images.

“One of the things we learned from the COVID pandemic is that infection control is an important part of thinking about upholstery,” Barber said. “Some of [the love seats] look a little less than a traditional couch you may have at your home, but we found that during COVID we really needed to wipe them down and keep them clean, so we’re trying to really balance making it a residence and making people feel comfortable but also making sure we’re taking safety in mind.”

A large multipurpose room, with chairs arranged in a circle, will host “morning and afternoon check-ins with all the residents,” Parah said. He also noted “a couple areas where residents would have access to computers” and unpictured storage space along the perimeter for folding tables for activities.

A dining room of four tables with four chairs apiece will lead into an open-concept kitchen for the residents’ use, with a wall separating it from the larger commercial kitchen where hired cooks will prepare meals. A ceiling beam imprinted with inspirational words such as “improvement,” “progress,” “freedom,” and “optimism” aroused negative comment at the meeting.

“I’ve heard that quite a bit. There’s been a lot of feedback that people don’t like that,” Parah acknowledged.

A “serenity room” will offer, in Parah’s words, a “space to be used for folks that are looking for a quiet space outside of their room to read a magazine or a book or just to sit quietly,” and a smaller “sensory room” will provide an even more private setting, with a rocking chair that, by Parah’s account, has already proven popular at VPCH.

A metaphorically named “greenhouse room” will give residents a chance to care for indoor plants. The facility’s architectural blueprint also shows an exercise room, and while the renderings don’t address it, Parah mentioned the likely purchase of a treadmill, a stationary bike, and a ping-pong table and the possibility of a rowing machine and a foosball table. Additionally, residents will have access to the old Woodside Juvenile Rehabilitation Center’s freestanding basketball gym on the property, a holdover from the demolished facility that used to occupy the site.

An art room prompted criticism during the meeting for its bareness. “It’s very dull. It’s not very uplifting to the mind or to the soul or to the spirit. It doesn’t seem very inspired. Maybe a part of it has to do with cutting costs; I don’t know. But it seems important to have a space that will have a therapeutic effect on people,” Linda Cramer of Disability Rights Vermont observed.

Karish countered that, in real life, the art room will feature artwork by the facility’s residents on its walls. “One thing to keep in mind is that these are just architectural renderings. It’s like a staged home – there’s not a lot of life to it,” she said. “It’s lacking the personal element that residents would bring to the space.”

Through its Art in State Buildings program, the Vermont Arts Council also intends to commission a $43,000 art installation inside the facility. A public survey went out in February, spotlighting four preliminary design concepts by Vermont artists.

Toward the end of the meeting, Barber solicited suggestions for a “flex space” with a to-be-determined purpose. One idea was to turn it into a music room.

The presentation didn’t include any renderings of a backyard, but Karish provided a description: “We have a walking path that goes around the yard. We have a covered porch area right outside the dining room for outside dining. We also have another patio area with a gazebo, and we have the raised beds [for gardening], and then we have a grass area that can be used for whatever.”

DMH plans to open the River Valley Therapeutic Residence in the first quarter of 2023. In March, the Green Mountain Care Board approved a $2.9 million budgetary increase for its construction, now expected to cost nearly $25 million.

“I think DMH has tried to be really clear that this is not a place where people are going to live for the rest of their lives. This is a transition,” Barber said. “This is a step down, but the goal is to get everyone back in the community. We want to help them as quickly as possible transition to the next level of care. We’re really hopeful that the new space and all the natural light and all the different things that have gone into the designing of it will kind of help with that.”