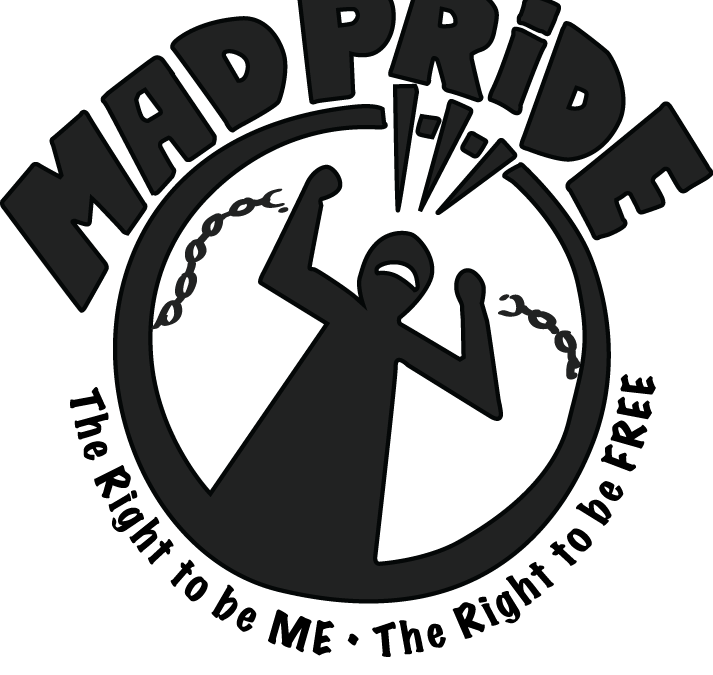 This was my second consecutive year attending the Alternatives conference. Like last year, I distinctly felt that there were (at least) two separate conferences happening concurrently.

One of these conferences centers the experience and perspective of a user of mental health services who is in recovery from a mental illness and has joined the peer workforce to serve others who are experiencing what they have gone through.

The other conference centers the experience and perspective of a survivor of psychiatric harm who works to resist and dismantle the coercive and forceful psychiatric system and to reinstate the human and civil rights of those who have been deemed mad.

Most of the keynotes and workshops could be easily placed in one or the other of these conferences but not both.

This split can be traced back to the conference’s origins. The Alternatives website contains a section on the conference’s history, from its first iteration as the Conference on Human Rights and Against Psychiatric Oppression – rooted in the mental patients’ liberation movement – to its NIMH sponsorship and rebirth as Alternatives, the conference for the peer recovery movement.

In that regard, the history of Alternatives parallels our history as a movement from militant and civil rights-based to professional and recovery-oriented.

The conference’s messaging this year has made much of its return to its roots without government funding. Since the Substance Abuse and Mental Health Services Administration defunded Alternatives, it has been forced to scale back, hosting the 2018 conference on a college campus and eliminating scholarships.

Following more than a decade of complaints about SAMHSA censorship (see Counterpoint Fall 2017, “SAMHSA Censors Alternatives”), the conference boasts that it is once again the “people’s Alternatives.”

At this point, though, there seems to be a struggle over who constitutes the “people.”

As with last year, the keynotes provided a powerful platform for dissenting voices. Sera Davidow of the Western Mass Recovery Learning Community called on proponents of “unity” to stop getting angry at folks for expressing divergent viewpoints and dissatisfaction with our movement.

Former VPS Executive Director Wilda White, whose keynote talk was “Crazy Lives Matter Too: Imagining a World Where Everyone Is Valued,” critiqued the psych survivor movement for being too white-centric and challenged both mad pride activists and racial justice activists to center the most marginalized – black and brown people deemed “crazy” – in our movements.

Every movement for social justice has faced a choice whether to throw its most marginalized members under the bus. Similarly, the C/S/X movement can choose to lift up the expressed needs of our entire community rather than insist that everyone agree on one agenda and one purpose.

A recent blog post by Emily Cutler on Mad in America rejects unity for “polyphony” – the multitude of experiences and expressions of distress and difference.

“There are countless ideas, philosophies, frameworks, and opinions about the causes, nature, and meaning of ‘madness,’ as well as how we should respond to it,” she writes. “It is therefore only natural that the critical psychiatry movement is not unified.”

I see in this movement, or movements, an expansive and fertile ground where polyphony is welcome and difference is an asset. Under an umbrella of cognitive liberty, mental health service users and prison abolitionists, disability rights activists and drug users – and anyone else whose thoughts and behaviors are policed by mainstream definitions of normalcy – have something to contribute.

It’s no coincidence that there is so much overlap among mad pride, neurodiversity, and anarchism – namely, the rejection of hierarchy and the practice of consensus. Consensus doesn’t mean unanimous agreement but rather that a group struggles together to find solutions that everyone can live with.

Conferences overwhelm me with their swarms of people, ideas, and noises, so I spent my evenings wandering around the neighborhoods surrounding the campus. One night I found a little cocktail bar and sat for a few hours with the bartender and the one other patron, a Washington local who works for the Veterans Administration.

They asked me what I was doing in town, and I asked about the work they did, and an entire discussion unfolded about socialism, human rights, alternatives to mainstream medicine, and the racism and classism driving gentrification.

It was one of the most energizing conversations I had while in Washington, and it reminded me that there are allies and comrades around every corner, not just in spaces dedicated to movement work.

Social justice theorists have long suggested that a shared identity is not the basis for a coalition but rather that a shared goal brings people together regardless of identity.

Perhaps it is time for those of us invested in dismantling a coercive and oppressive psychiatric system to team up with others who are resisting paternalism and capitalism in the form of mass incarceration, lack of health care, homelessness, family separation and other forms of state violence.

Alternatives may continue to be a crossroads where the peer-identified and survivor-identified briefly intersect but barely overlap. But I’d like more. I’m looking for that third option.

I’d like to co-create spaces where the conversation is expanded rather than synthesized and simplified. I’d like all of us to take part in more conversations about restorative justice, fat acceptance, racial justice in schools, sex workers’ rights, climate science, and everything else we struggle for as humans living in a sometimes inhuman world.

Because madness is intersectional, and it does not occur in a vacuum. And because we might find we have more in common than we thought.

Calvin Moen is the training director for Vermont Psychiatric Survivors and does grassroots organizing for mutual support in Brattleboro.